About Me (by Eugene Reimer)

I have worked at truck-driving (A.K.Penners) in 66; surveying (Manitoba Highways) in Birds Hill Park in 67; hammer-and-nails construction (A.K.Penners) in Winnipeg in 68; surveying, gravel-testing, road & drainage design etc (Manitoba Highways) in southeastern manitoba in 68, 69, 70-71, and in northern manitoba in 72. I did computer programming related to mechanical engineering for Atomic Energy of Canada in Chalk River in 74, and MVS systems programming for MGCC (later called MDS then ISM) in 75. Between 1976 and 1989, I worked in the Computer Centre at University of Manitoba, except for a one-year leave in 86-87 which I spent working in southern california with Systemhouse building a "wanted person system" for Los Angeles County. Between 1989 and 91, I again worked for Systemhouse (later acquired by EDS), based in Winnipeg, but traveling a good deal to places like San Francisco, Los Angeles, Washington, Halifax, Toronto, Ottawa, and Baltimore. Since 1991, I have been self-employed, taking on computer related projects on a contract basis.

In 1991 when I became self-employed, or semi-retired, I moved to a quiet rural location beside the Red River near St.Jean MB, where I re-discovered an interest in non-human living things such as trees and mustelids, while building trails through the riparian forest mostly by mowing burdock and nettles. I also learned what a Ford 8-N tractor looks like from the inside, and did a lot of reading, mostly in areas that I had previously neglected such as history, biology, and my mother-tongue Dietsch. During the winters I did computer-programming projects.

I have spent a lot of my adult life writing computer programs, and I currently run Linux on an AMD-powered PC. At one time I could claim to know every programming-language except Basic:-) When next a suitable lull occurs, I intend to dust off some of my programs and to give them away, on this website.

In 2010-November, I resigned as webmaster for Nativeorchid.Org and Debwendon.Org;  both are now handled by Will Milne.  More info in cancer.htm.  In 2011-May, I resigned as a NOCI-appointed director of Debwendon Inc.

Even more about me...  As you are probably aware Eugene died in 2011. His website is still being maintained by a friend, Bill Reid. To contact Bill: mailto:webmaster@ereimer.net 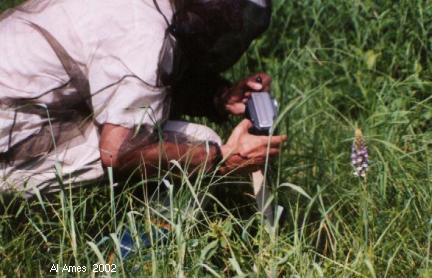 me, in a bug-shirt, stalking the elusive Purple fringed-orchid at Buffalo Point MB on 02jul16: