This story begins with an email from Joy Parks of Canada Post on 2007-07-18, however I was prevented from talking about it for several years.  She wanted to feature one of my Calypso photos on an upcoming Canada-Post stamp.  Some of my photos, including some of Calypso, would appear to be suitable for use on a stamp, however in my opinion the one she selected was not one of them.  She may have selected that one because of its claim to being "first Calypso photographed in Churchill" (see my Orchid-of-the-month article in the 2005-02 issue of Native Orchid News).  It left me curious to see what sort of success their graphic-design people would have with photoshopping (gimping) that photo.  Clearly they'd need to eliminate the unsuitable background, but that would still leave serious problems with the unfortunate lighting leaving some parts of the flower in shadow that would not be altogether easy to solve... 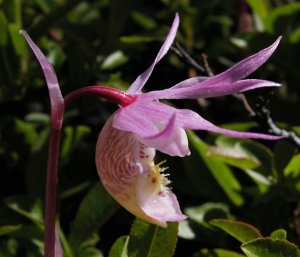 Originally scheduled to appear as part of a 2009 series, which was to be announced in spring of 2008, we were informed that this series had been postponed for a year so that Canada Post could bring out a 2009 series featuring Winter Olympics themes.

Then this month, on 2009-07-03, I was informed that:  between the time your photo was selected and now, at some point in the design process, our designers opted to not use your photo; it does happen from time to time that the designers simply decide for esthetic or technical reasons that a particular image they initially requested simply doesn't work for the purpose they had intended.  Our records show that we have sent you payment for use of the image; we hope that will suffice for the time spent sending us images and corresponding with us.  I have appreciated your cooperation as we worked on this issue, and apologize for any inconvenience this situation may have created.

I had in the meantime posted a rant about the incompetence at Canada Post (not involving stamps), however I don't think that influenced their decision, but rather their graphic-design team simply despaired of making anything suitable from that photo.

Being curious about what the stamp that never was might have looked like, here's my crude attempt at turning the photo into something suitable, where I've darkened the background, and brightened the shaded parts of the flower: 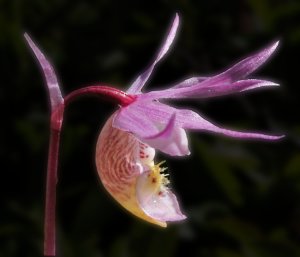 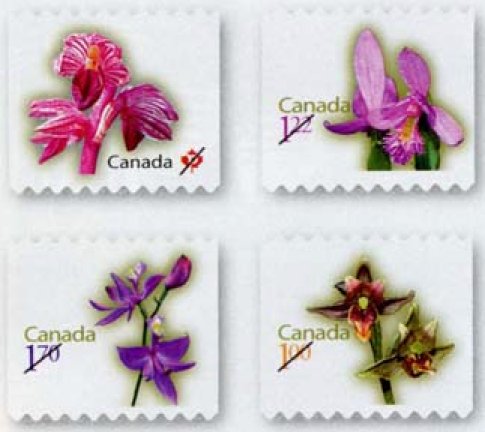 According to press-releases they are: $0.57 Striped Coralroot, $1.00 Giant Helleborine, $1.22 Grass Pink, $1.70 Rose Pogonia.  However Grass-pink and Rose-pogonia have been interchanged.  And something has gone horribly awry with the colour of Grass-pink (Calopogon), at least I've never seen it in any colour even remotely close to what's shown.

The Calopogon stamp is based on a photo by Hans Neufeld, reproduced below, that Canada-Post found on the same website where they found mine, www.nativeorchid.org.  Now why did Canada-Post decide to render a pink flower in a dark purple I wonder?  Perhaps for their stamps to be colour-coded it needed a distinctly different colour from the Pogonia, and that was more important than being true to reality? 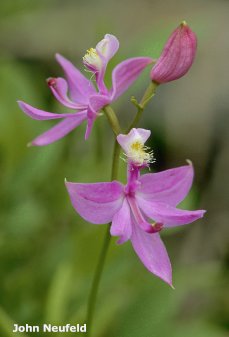 PS: Even with the colour-change Canada-Post still couldn't keep the two pink flowers straight.  And then they misspelt Neufeld.  By now, I'm thinking that I got off lightly: I got paid for my photo to be used on a stamp, and yet didn't have to suffer the aggravation of seeing a mangled image, mangled name, etc:-)